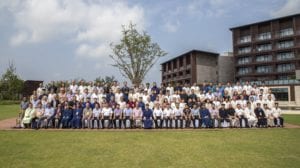 The Daoist Ecology Temple Network is a major achievement of the China Daoist community at large. The fact that one of the largest nations and economies on this planet will integrate Daoist tradition and ecology in their national policy, is an innovative initiative and an example for the rest of the world. I am grateful that my foundations “Ecological Management Foundation” and “Valley Foundation” were invited to participate in and to support this initiative, right from the start.

The  first time I learned about the Daoist tradition was in 1981 when I read a book from Alan Watts, “ Tao, the Watercourse Way”. It made me aware of  the cosmological relationship between heaven, earth  and human : a truly ecological concept. Then, in 1983 I visited Daoist temples on Taiwan and started to read the Tao Te Ching and Chuang Tse.  I also participated in a study  by the National Taiwan University  on the relationship between economy and ecology. The report “ The Taiwan 2000 Study: Matching Economic Growth with Environmental Protection” came out in 1989. It helped to prevent that  “the economic  miracle of the Far East” would turn into “the ecological disaster  of the Far East”.

When Martin Palmer asked me in 2004 if I would be interested to participate in the setting up of a new Daoist temple in Taibai Shan to be connected with an environmental education facility, I was , as you may understand, delighted to support linking Daoism and ecology in China. The origin of this initiative came from Master Ren Xingzhi, abbot of the Louguan Tai Temple, Professor Fan Guangchun at the Shaanxi Academy of Social  Sciences  in Xian,  and World Wide Fund for Nature in China (WWF China) near the Panda Lodge on Taibai Shan.

In 2006 a conference took place on Taibai Shan resulting in the Qinling declaration on the establishment of a Daoist Ecology Temple Network and subscribed by around 15 temples. In 2007 the first  Daoist ecology  temple, Tiejia on Taibai Shan was officially inaugurated.

Then, in 2008  there was the Mao Shan conference attended by around 200 Daoist masters and nuns, and  government officials.

So, 10 years ago the Daoist Ecology Temple Network caught fire and today we celebrate its further expansion all over China, and which is the goal of this conference.

Let me finalise with a personal note; when the Tiejia Temple was being built I was given the opportunity to donate the incense burner to the temple in remembrance of my eldest daughter Anneke who died of cancer at 49 in 2004. My family has visited the temple several times. From Taibai Shan to this First International Daoist Ecological Forum  here at Mao Shan is a very special journey in my personal live as well as a remarkable step for the wider world.

I wish Abbot Yang and the whole Mao Shan Daoist community all the best in promoting the Daoist Ecology Temple Network in the course of the next 8 year plan of the China Daoist Association.